Home All Do They Really Exist? – 7 Best Tablet with built-in Projector |... 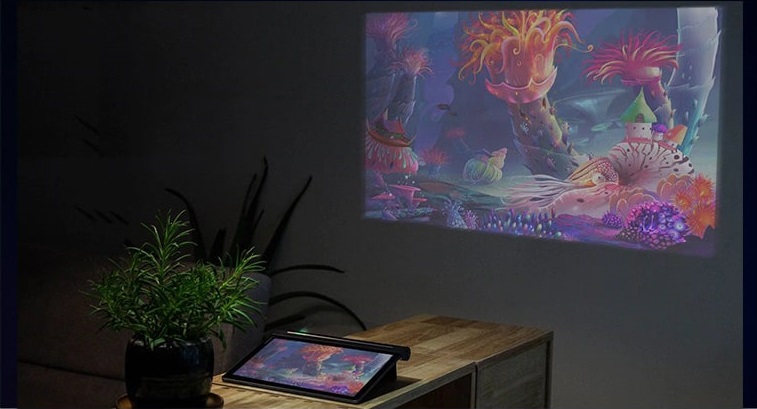 Watching movies on a massive screen is fun!

A typical tablet phone has a 10-inch screen, which is a great choice for watching movies and enjoying digital content. But it’s not as impressive as watching movies on a 60-100 inch projector screen.

Technology is growing at an astronomical pace, and consumers are being introduced to new and exciting gadgets daily. When it comes to the entertainment industry, a Tablet is an excellent choice for Web surfing, streaming videos, and gaming.

Few tablets on the market have a built-in pico projector. This tiny device based on Android has the ability to project your movies, images, and presentations on a larger-than-life screen.

Just like a pico projector, the tablet projector hybrid can convert any flat surface into a display.

Do Tablet with built-in Projector exist in 2022?

It would be a great alternative to an average Tablet or a standalone pico projector.

But such devices don’t exist at least in 2022. Nowadays, everybody is after thinner and lighter gadgets that can fit into their pocket or at least backpack. Many smartphone and laptop brands, including tech giant Lenovo, tried to pack a pico projector into a Tablet, but that made it chubbier and probably heavier than other devices.

So even when Lenovo did a great job with their Yoga Tab 3 Pro (which we will discuss later in this article), the product has been discontinued and is no longer available to customers. Apart from Lenovo, a few well-known brands had come up with tablet projectors, but the quality of the projected image was so poor, and it wasn’t even watchable, so they had to discontinue their product.

It could be a great way to enjoy videos with your friends without crowding around and peering at your Tablet’s small screen.

For people that love watching movies, streaming the latest Netflix series, and an endless number of YouTube videos on a big screen, adding a pico projector to a smartphone or Tablet could make a significant difference. But sadly, we do not have any choice in 2022.

In the following section of the article, I have listed and discussed all Tablet Projectors launched over the last decade with their details. I also have given the links to their official website and Amazon product page, so don’t forget to read till the end. It is not guaranteed, but maybe you can find one in online stores like AliExprees.com.

Now without any further ado, let’s get started,

The Lenovo Yoga Tab 3 Pro is made for business executives and frequent travelers. It is our top pick on this list because it offers excellent performance compared to others.

The Tablet packs a superb pico projector with 480p resolution and a brightness of 50 lumens. The Projector is capable of projecting on a screen of 50-70 inches.

Four JBL speakers with Dolby Atmos Technology produce a loud and clear sound. The sound from Lenovo Yoga Tab 3 Pro is most satisfying compared to rival tabs on the market.

You can use the built-in Projector for office and classroom presentations. For movie watching, note that 50 lumens are not sufficient to project a clear image in a well-lit room. So use it in a dark room.

ZTE Spro Plus is famous as a portable Android-powered projector because it is more of a projector than a tablet.

At first glance, you might conclude that this is the thickest Tablet you have ever seen!

It packs a powerful pico projector with an insane brightness of 500 lumens, the highest brightness offered by a Tablet Projector Hybrid to this date. In other words, you can use this Projector in a dark environment and the presence of medium ambient light.

You can connect a Bluetooth gaming controller to this Tablet and enjoy games on a massive screen of 80-inches.

The Aiptek ProjectorPad P70 has an impressive DLP pico projector, 7-inch IPS display with 1024×600 pixel resolution. It costs $369 only, which is the lowest price for a tablet with a built-in projector.

It equips a Quad-core processor with 1GB RAM, which is a poor combination, but it will get the job done for most users looking to enjoy movies on the big screen with a tablet projector.

This Tablet doesn’t equip a powerful battery. You only have 2 hours of battery backup while using the power-hungry DLP projector.

The Spro 2 is one more popular tablet projector from the brand ZTE. It is a highly portable projector equipped with modern technology for on-the-go entertainment.

Apart from being an excellent tablet projector, it is an impressive WiFi hotspot device that allows 10 users to connect and enjoy the internet.

It comes with a 5-inch touchscreen display and an intuitive user interface. You will see several options on the startup, including Settings, Media, Home, Office, and Apps for quick navigation. Also, you will find two Orange Widgets titled “Hotspot” and “Projector” on the Homescreen for easy and fast access to hotspot and projector settings.

The brightness of 200 lumens is sufficient for office and classroom presentations. It will bring a theatre-like experience in dark rooms.

Note that this tablet projector lacks a front and rear camera.

Akyumen Holofone is a unique tablet with Dual Boot capability. You can operate it on Android as well as Windows operating system.

Running Windows on a 7-inch display sounds pretty crazy! But the concept is simple, consider operating Windows on a big screen of up to 100-inch with a built-in pico projector.

Akyumen Holofone comes with an excellent 45 lumens projector that boasts 720p (1280×720) resolution. You will experience sharp and clear image quality in dark rooms.

The price of this tablet projector is relatively high compared to others. It is shipped with host accessories that include Bluetooth speakers, an Akyumen Sabertooth pen, a game controller, a Saber stand with a built-in battery (allows additional 5 hours of battery life), earbuds, etc.

Hexa Eclipse is a compact and portable computer for people on the go! It operates on Windows operating system.

This tablet projector is made for office presentations. The pico projector has decent brightness of 220 Lumens with 720p resolution. It comes with powerful speakers that produce a loud and clear sound.

This Projector has USB, HDMI, Ethernet, and RJ45 ports available. Along with these ports, you will find a 3.5mm audio jack and a memory card slot.

The TouYinger Tablet Projector is made for office presentations and home entertainment. If you are looking for a cheap Tablet with a built-in projector, this is the best deal.

The Tablet comes with an 8-inch screen and 720p resolution to produce sharp and clear pictures.

It packs a 4000 mAh battery, giving you the battery back-up of 2 hours in projection mode.

The TouYinger S8 DLP offers decent performance in the presence of ambient light. However, using it in a dark environment will deliver better performance.

In 2022, many smartphones and tablets are available, and choices are almost infinite, but they do not have a built-in Projector.

Most of the Tablets discussed above are discontinued and not available on the official website and Amazon store, so there is no hope. But you can subscribe to our newsletter, and we will notify you if any tablet projector hybrid is launched in the near future.

So, that’s all about Tablet Projector in 2022. Let us know if we are missing to consider any fantastic tablet projector worth adding to this list. 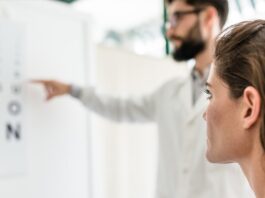 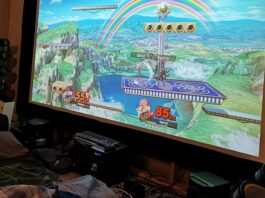 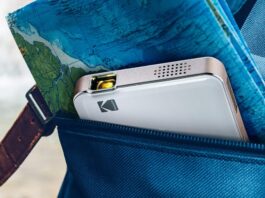 ABOUT US
FOLLOW US
©
We use cookies on our website to give you the most relevant experience by remembering your preferences and repeat visits. By clicking “Accept”, you consent to the use of ALL the cookies.
Do not sell my personal information.
Cookie SettingsAccept
Manage Consent